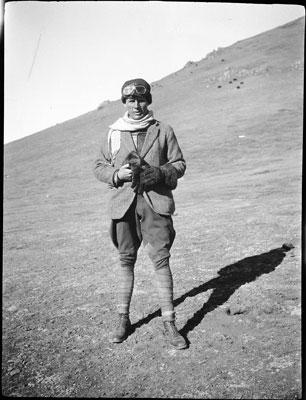 Arthur Hopkinson in his travelling gear

In Negative - 'A31' has been written on the top edge of the negative in black ink. The negative has been machine perforated along the bottom edge. 25 holes have been perforated in total [MS 12/05/2006]

Notes on print/mount - One contact print made from this negative is contained in A. J. Hopkinson's negative case with the negative. A caption has been written on the back in pencil: "A J H 1926" [MS 24/06/2006]

Other Information - Dates: Although this has been captions 'A J H 1926' it may have been taken in January 1927. The landscape resembles that around Gyantse, and the image seems to be related in Hopkinson's negative album to a group of images that were taken when he left Gyantse for the first time to travel back to Yatung between January 17th - 26th 1927 [MS 24/06/2006]