Pasang and children in Gyantse Fort 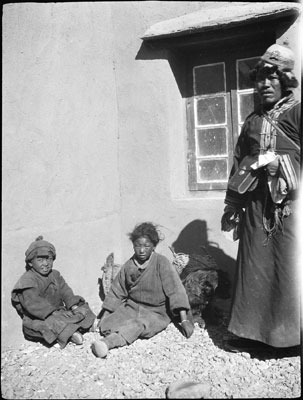 Hopkinson's Head chaprassi, Pasang, is here seen holding a camera case whilst Hopkinson photographs two Tibetan children, apparently in a corner of the British Fort at Gyantse. Hopkinson's first period of time at Gyantse as Trade Agent lasted from January 2nd - 17th 1927, when he then returned to Yatung and this photograph was taken during that period. Baskets can be seen behind the children and a dog sits next to them with his head turned away. A Fort window of western design and with some cracked glass panes can be seen behind

In Negative - 'A30' has been written on the left edge of the negative in black ink. The negative has been machine perforated along the left side. 21 holes have been perforated in total [MS 12/05/2006]

Notes on print/mount - One contact print made from this negative is contained in A. J. Hopkinson's negative case with the negative. The print appears to have been removed from an album, as there are traces of black mounting paper around the edges of the print as if it has been taken out after previously being glued in place. A partially decipherable caption has been written on the back in pencil: "A corner in Gyantse (Brit) Fort". The number 34 has been written on the front top right corner in pencil.

Other Information - Description: [Extract from taped interview, Richard Blurton and Mrs Hopkinson] '30 - the servant of AJH [Arthur Hopkinson] carrying the camera, accompanied by a dog, probably outside one of the rest-houses on the way to Gyantse' [MS 21/04/2006]