View of Gyantse from north 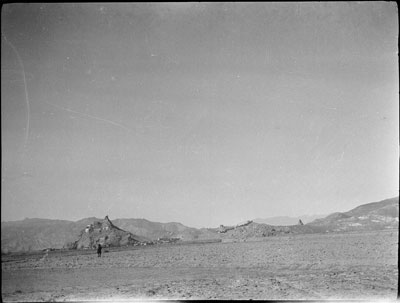 A view of Gyantse town and dzong taken from the north. Hopkinson refers to this image having been taken variously from near the 'Chinese Cemetery' or from near the Rifle Range [see Notes]. Hopkinson's first period of time at Gyantse as Trade Agent lasted from January 2nd - 17th 1927, when he then returned to Yatung and this photograph was taken during that period. A Tibetan man can be seen in the lower left corner of the image

In Negative - 'A28' has been written on the left edge of the negative in black ink. The negative has been machine perforated along the left side. 21 holes have been perforated in total [MS 05/05/2006]

Notes on print/mount - Two contact prints made from this negative is contained in A. J. Hopkinson's negative case with the negative. The older print appears to have been removed from an album, as there are traces of black mounting paper around the edges of the print as if it has been taken out after previously being glued in place. A partially decipherable caption has been written on the back in pencil: "Near British Fort at Gyantse (Rifle Range). Tibetan Fort (Jong) and Monastery to R.". The number 38 has been written on the front top right corner in pencil. The later print has the hand-written caption "A. 28 - Gyantse Jong [ from range ]" in pencil on the back [MS 24/06/2006]

Other Information - Description: [Extract from taped interview, Richard Blurton and Mrs Hopkinson] '28 - the approach to Gyantse - note the dzong , the town and the monastery precinct wall' [MS 21/04/2006]