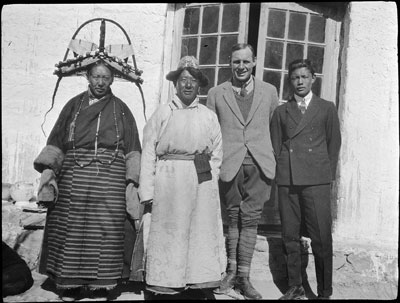 Taring Raja with his wife and son Jigme at home near Gyantse, with Arthur Hopkinson second right. They had invited Hopkinson and some of the Trade Agency staff to lunch at their house. This was the first time that Hopkinson had met the Taring family but he was instantly impressed by all the family members and went on to develop a good relationship with both the parents and the children. Rani Taring is here wearing an impressive Gyantse-region head-dress adorned with pearls and corals. Jigme Taring, standing, is wearing a western style suit. He had been at St Paul's in Darjeeling, Sikkim

In Negative - 'A26' has been written on the right edge of the negative in black ink. The negative has been machine perforated along the right side. 20 holes have been perforated in total [MS 05/05/2006]

Other Information - Description: [Extract from taped interview, Richard Blurton and Mrs Hopkinson] '26 - the Tarings with AJH [Arthur Hopkinson]. This Taring family is not the same family as the Lhasa Tarings who were so instrumental in aid for Tibetan refugees after 1959. Mary Taring was related to the Sikkim Raja and helped enormously with Tibetan refugees in Sikkim. The name Taring = Tsering. Another important noble family were the Tsarongs, at whose huge country house Mr and Mrs H. [Hopkinson] stayed in on their way from Shigatse to Gyantse. On that occasion a lama in the chapel chanted all night for the benefit of the visitors. The march before that was very long, with no exact known mileage' [MS 21/04/2006]