Horses on path near Gyantse 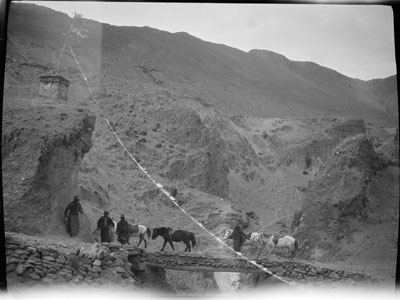 A group including Rai Sahib Tsering Wangdi [right] and Pasang [2nd from right] accompanying A. J. Hopkinson in the hills around Gyantse. It is likely that this photograph was taken on the occasion of a visit to Cholung Hermitage in January 1927, which was on a hillside to the north east of Gyantse. The horses and grooms are crossing a stone bridge and prayer flags can be seen suspended across the bridge from the structure on the nearby rock on the right of the image

In Negative - 'A22' has been written on the left edge of the negative in black ink. The negative has been machine perforated along the right edge. 21 holes have been perforated in total [MS 05/05/2006]

Notes on print/mount - One contact print made from this negative is contained in A. J. Hopkinson's negative case with the negative. The print appears to have been removed from an album, as there are traces of black mounting paper around the edges of the print as if it has been taken out after previously being glued in place. A partially decipherable caption has been written on the back in pencil: "[?] ... way to Ri [?]. Note prayer flag across front". The number 7 has been written on the front top right corner in pencil and then erased.