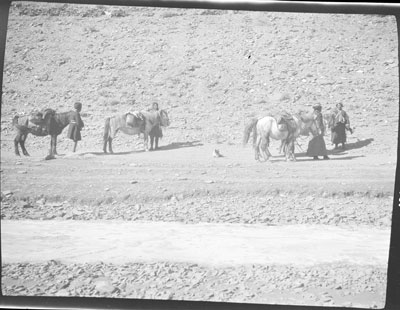 A group of A. J. Hopkinson's transport ponies taking him to Gyantse for the first time as British Trade Agent in January 1927. This is the road leading into Gyantse. Tibetan men can be seen holding the reins and Hopkinson refers to one of them as Wangdi, the Head Tibetan Clerk at Gyantse. This is probably the second man on the right. Horses and grooms are standing next to a frozen stream. The dog in the centre was called Khyitra and Hopkinson states that he runs all the way from Gyantse to Yatung [see Notes]

Notes on print/mount - One contact print made from this negative is contained in A. J. Hopkinson's negative case with the negative. The print appears to have been removed from an album, as there are traces of black mounting paper around the edges of the print as if it has been taken out after previously being glued in place. A partially decipherable caption has been written on the back in pencil: "[?] R. S. Wangdi in front - in middle 'Khyitra' [?] small dog, which runs [?] the march from Gyantse to Yatung". The number 4 has been written on the front top right corner in pencil. [MS 24/06/2006]