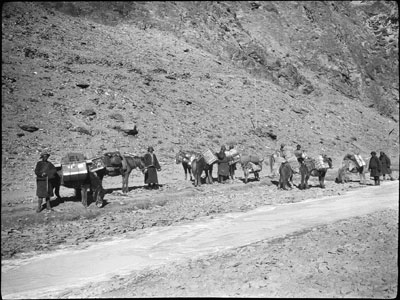 A. J. Hopkinson's transport taking him to Gyantse for the first time as British Trade Agent in January 1927. This is the road leading into Gyantse. Mules with heavy loads can be seen with their drivers standing next to a frozen stream

In Negative - 'A10' has been written on the right edge of the negative in black ink. The negative has been machine perforated down the left hand side. 18 holes have been perforated in total [MS 05/05/2006]

Notes on print/mount - One contact print made from this negative is contained in A. J. Hopkinson's negative case with the negative. The print appears to have been removed from an album, as there are traces of black mounting paper around the edges of the print as if it has been taken out after previously being glued in place. A partially decipherable caption has been written on the back in pencil: "[?] to Gyantse from India""[?] to Gyantse from India". The number 5 has been written on the front top right corner in pencil [MS 24/06/2006]

Other Information - Description: [Extract from taped interview, Richard Blurton and Mrs Hopkinson] '10 - the caravan of AJH [Hopkinson], somewhere beyond Phari on the road up to Gyantse. Note the yakdan , or mule trunk which were slung one on either side of a mule, and weighed 80lbs each (2 pukka maunds in total). They were made in Peshawar bazaar of leather-covered wood with hooks and chains for fastening to the mule's saddle' [MS 21/04/2006]