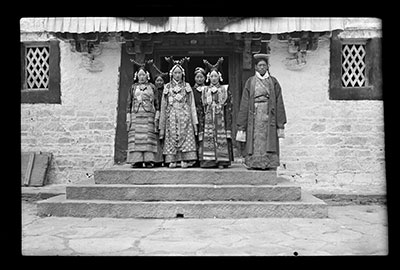 Other Information - Background: Richardson briefly discusses the duties of the Yaso in Ceremonies of the Lhasa Year, 1993, London: Serindia Publications, pp. 31-3. Two officials were appointed with the Mongol title of Yaso for the duration two days on the 22nd and 23rd days of the first Tibetan month for the preparations of the camp at Lubu and the Review at Trapchi. The title Yaso carries with it the responsibilities of commanding the two wings of the ancient militia and leading the military exercises over the two days. "In the morning,dressed in magnificent robes and mounted on ponies caparisoned with gilded trappings and coloured rosettes on their heads, the Yaso ride in procession with a large retinue to the Jokhang ... The Yaso robes are of the most costly brocade embroidered with dragons on the front and back, and so heavy they can stand up by themselves. They weaar large, round,flat hats with a fur brim and red silk crown with a vase-shaped gold and turquoise ornament and a coral button on top. The robe is girded by a wide gold belt and they wear a dagger, an embroidered purse and a silk-covered cup case. Their attendants are also in fine brocade or silk of blue or green; some have a red baldric over the right shoulder; some have flat fur-brimmed hats; others have Mongol style fez-shaped brocade hats; they wear gold bracelets and carry coral rosaries. The retinue is completed by a group of six ladies. Two are maids of honour, usually relations of the Yaso; two are servers of chang (barley beer) and are also of noble rank. These four are dressed in fine brocade with the traditional bright striped apron,and a lavish display of ornaments of turquoise,gold, pearls, coral and amber. The other two are household servants and less richly dressed. (p. 31) [KC 21/9/2006]