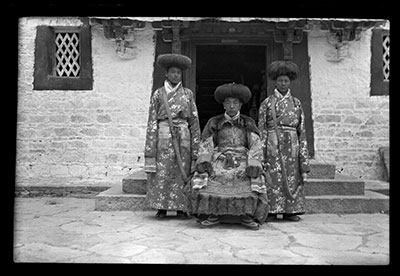 Ruthog Depon in the ceremonial clothes of a Yaso seated on a chair with an attendant standing on either side of him. The photograph is taken in front of some steps leading up to the entrance of a house. There is a small window on the left with lattice-work fretwork. Two officials were appointed with the Mongol title of Yaso for the duration two days on the 22nd and 23rd days of the first Tibetan month for the preparations of the camp at Lubu and the Review at Trapchi.

Clare Harris 2003: The Yasö General, Ruthog Dapön, and two attendants. The Yasö Generals are commanders of an ancient Tibetan militia whose elaborate dress could be so heavy that they could not stand up (according to Richardson). Only fourth rank officials were allowed to take this role and those who performed it incurred great expense when ordering the fine gowns required. In 1940 Ringang was a Yasö General and Dundul Namgyal (George) Tsarong became one later.

Other Information - Dates: Contact prints of the type of which this image was made seem to have been made between 1944-49. There are 46 images printed out on Velox paper with no batch number references, including many images of the Nechung oracle, certain inscriptions and visits to monasteries and historical sites as well as scenes with officials on a swing. Some of the images are clearly related to the Nechung Oracle ceremony that took place on the 8th Day of the 5th Month of the Tibetan Year of 1944, some contain images of Major James Guthrie who took up the post of Civil Surgeon Bhutan and Tibet, spending some considerable time in Lhasa, in March 1945 [see Tibet and the British Raj, Alex McKay, Richmond: Curzon Press, 1997, p.237] and many images have been dated on the back by Richardson to 1946. They also include images of the Samye inscription pillar, which Richardson states that he photographed in 1949 [A Corpus of Early Tibetan Inscriptions, Royal Asiatic Society, James G. Forlong Series, No. XXIX, Hertford: Stephen Austin & Sons Ltd, 1985, p.26] [MS 17/12/2005]2001.59.9.76.2