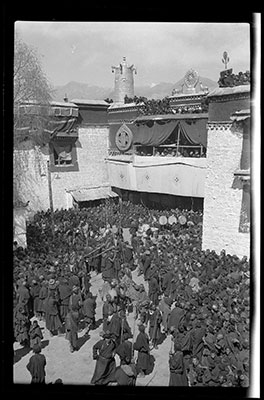 The Lugong in ceremonial dress performing in the courtyard outside the main entrance of the Jokhang filled with crowds of spectators. The occasion is the ceremony of the Lugong gyalpo (glud 'gong rgyal po) which took place on the 29th day of the second Tibetan month. The Lugong's torma may be seen being held by several men in the foreground of the image.

Manual Catalogues - Notes on negative index - 'Lu gong at Jokhang prayer' 'do' [Lugong] (red ink) is written in Richardson's hand on a piece of paper glued onto the first page of the negative album. [KC 20/9/2006]