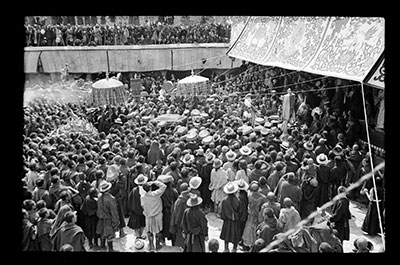 Courtyard packed with people for the Lhadur ceremony at Nechung monastery, the seat of the State Oracle. The ceremony centres around the going into trance under possession of Pehar, the main spirit protector of Tibet, of eight oracle priests, including Nechung himself. Onlookers surround the courtyard at Nechung. Ceremonial umbrellas visible above crowds. Spectators on rooftops of surrounding buildings decorated with banners.