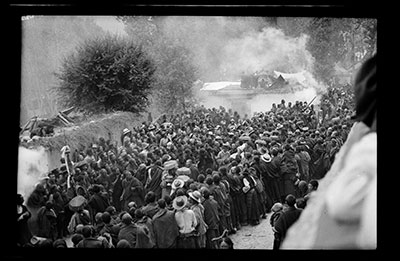 An oracle in ceremonial dress surrounded by monks and onlookers in the precincts of Nechung monastery during the Lhadur festival. There are clouds of insense smoke in the air.

Research publication - Hugh Richardson, Ceremonies of the Lhasa Year, 1993, London: Serindia Publications, p.92. '"The Comparison of the Gods" at Nechung."