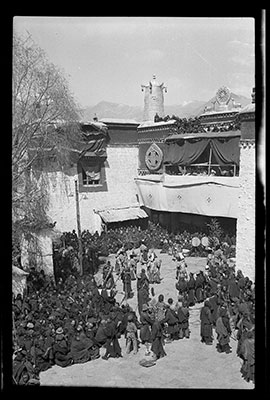 Black bat dancers in ceremonial dress performing in the courtyard outside the main entrance of the Jokhang filled with crowds of spectators. The occasion is the ceremony of the Lugong gyalpo (glud 'gong rgyal po) which took place on the 29th day of the second Tibetan month. In the centre foreground of the image there are a number of people holding the Lugong's torma of brushwood entwined with sheep's entrails. Next to them is the ragged little boy dragging a dogskin.

Manual Catalogues - Notes on negative index - 'Lu gong at Jokhang prayer' 'Lugong' (red ink) is written in Richardson's hand on a piece of paper glued onto the first page of the negative album. [KC 20/9/2006]

Manual Catalogues - Richardson's handlist Album 'A' - "Nos 1-20 illustrate the Scapegoat ceremony,the Glud-'gong rgyal-po , on the 29th day of the second month. no.2 The Kashag are seated in a balcony overlooking the courtyard in front of the Jokhang; and the Zhal-ngo -the Proctors of Drepung- are seated on the north side of the courtyard. The ceremony starts with a dance by Black Hat "magician" dancers. No. 6 Long trumpets, in the foreground, sound a summons and the scapegoats, two men dressed in half their face painted black and half white, run in to a great noise of clapping and whistling; they dance round the courtyard. The two have been chosen some time before and are allowed a great deal of liberty for some days before the ceremony when they demand food and money from the shopkeepers and passers-by who give for the sake of having their ill luck removed. While they dance money is thrown to them and bags of grain are offered to urge them to go away. One of the black-hatted dancers challenges the scapegoat to debate the merits of the doctrine and eventually it is decided to settle the dispute by casting dice with the Byang chub glong Abbot. This is done; and as the scapegoat's dice are all ones and the abbots are sixes, the result is a foregone conclusion."

Other Information - Setting: Richardson mentions that he saw this ceremony on three occasions so one can assume that the photographs of the ceremony are from three different occasions. He provides a very full description of the proceedings in Ceremonies of the Lhasa Year, 1993, London: Serindia Publications, pp. 61-71, "In this ceremony two men dressed in shaggy goatskins and with their faces painted half black and half white are driven out of the city in a performance which has a superficial resemblance to the ritual recorded in other civilizations where a scapegoat is expelled bearing with him the sins of the people. ... of the two men on whom the burden fell one was a poyen , servant, of the magistrates of the Sho whose other duties were to flog criminals and look after the neighbouring parks; the other was chosen by the villagers of Phenpo who were tenants of the Kundeling monastery in Lhasa. (p.62) Unlike the majority of ceremonies at Lhasa this one does not start until midday. By then a crowd has gathered around the courtyard in front of the main entrance to the Jokhang. Then the two Shengo of Drepung with their deputies,attended by brawny monk police carrying long poles, staves and sticks, march gravely across the courtyard and sit on a bench below the Dalai Lama's window. A long blaast from two silver horns on the west side of the courtyard announces the emergence from the Jokhang of the Changchubling monks who perform a short ritual of exorcism to the accompaniment of oboes and cymbals. When that is finished a party of Black Hat (Shanak) monk dancers, also from Chanchubling, wearing tall broad-brimmed hats surmounted by flame-like fretwork and a conical gold ornament, perform the slow pirouettes of their tantric dance, gesturing with wide, flowing sleeves and holding a skull cap in one hand and a dorje in the other. While they dance the lopon, the senior teacher of Changchubling, enveloped in a red cloak and wearng a yellow mitre, comes to sit on a high cushioned seat facing the Dalai Lama's window." p. (64-5).