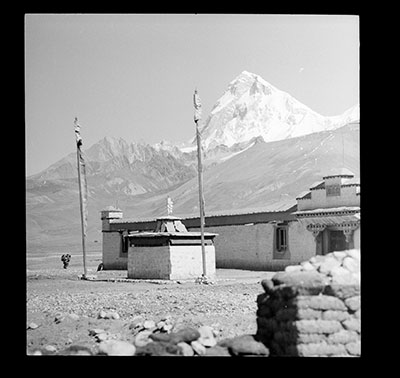 Mount Chomolhari in the background and a temple at Phari (phag ri). There is a wall of dressed stone in the foreground and prayer flag poles either side of a small shrine or prayer-wheel house in front of the temple.

Other Information - Setting: Pha ri (phag ri) is situated at 4360 m and is one of the highest settlements in the world. The town served as a major trading centre between Tibet, Bhutan and Sikkim. It also served as the main administration centre for Western Tibet. It is surrounded by major Himalayan peaks, in the east Chomolhari is visible and in the west lies the Kunchenjunga range. (TS)