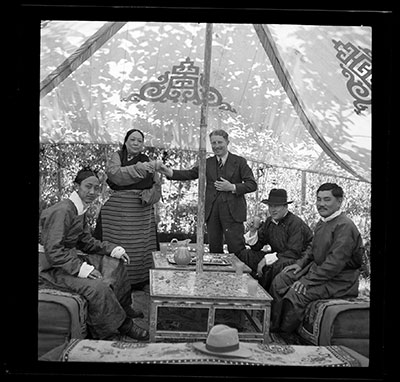 Party at Lhalu Lhacham's beneath an appliquéd tent. Standing in the centre clinking glasses raised are Dr. O'Malley and Lhalu Lhacham, herself. Seated on the right is Rai Sahib Pemba Tsering, a person who worked for the British Mission and Reginald Fox (wearing a Homburg hat) and seated on the right is a unknown Tibetan official. Either side of the centre pole of the tent are two low tables upon one of which there is a tray and a jug containing the liquid (most probably chang barley beer) which O'Malley and Lhalu Lhacham are drinking. In the foreground there is a light coloured Homburg hat resting on the carpeted seating most probably belonging to the photographer of this image, Hugh Richardson.