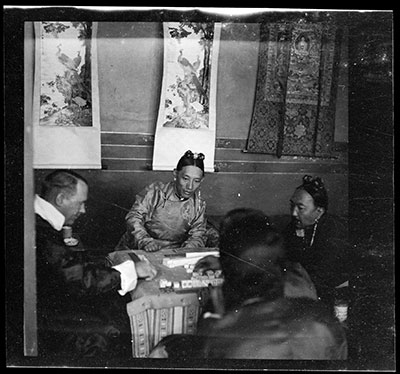 Four players (left to right) Reginald Fox, Doring, Kyibu and unknown person with his back to the camera playing majong. There are two Chinese style paintings and one Tibetan painted scroll (thang ka) on the wall behind them.

Other Information - Dates: This is one of a group of related images that have contact prints all with a very distinctive batch development number on the back, which appears to be the number 507 printed in red but is in all cases identically partially indecipherable, indicating that they were all made at the same time. Some of these images relate directly to Richardson's trip to Shigatse in 1938 and this has assisted the dating of this image [MS 19/12/2005]