The Shengo and Abbots of Drepung monastery 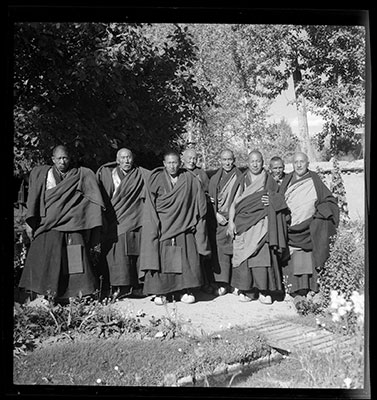 The three Shengo (with padded shoulders) and five Abbots of Drepung monastery in the garden of Dekyi Lingka. The garden wall is directly behind them and there is a narrow slatted, slung bridge over a narrow canal in the foreground on the right.

Clare Harris 2003: Drepung monatsery was founded in 1416 by Jamyang Choje Tashi Palden (1397-1449) and named after the abode of Shridhanyakata in south India. It was the largest monastery in the world, inhabited by approximately 9000 monks of the Geluk sect, and was closely associated with the Dalai Lama lineage.

Other Information - 'The three monks on the left are the Drepung Shengo and on the right are the 5 Drepung Abbots.' [TT in conversation with KC] [KC 9/6/2006]