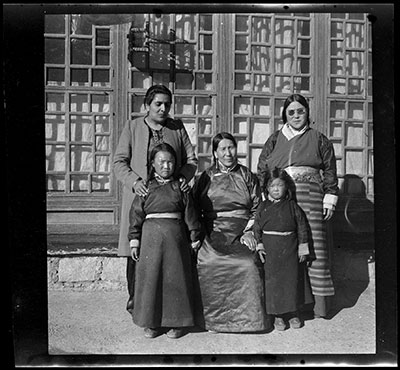 The Dalai Lama's mother, Gyayum Chenmo, Dekyi Tsering,(seated) with the wife of an Indian official, standing on the left and her eldest daughter, Tsering Dolma (in sunglasses) on the right. The girl on the left is the Dalai Lama's sister, Jetsun Pema (b. 1940) and the girl on the right is Tsering Dolma's daughter, Khando Tsering. The photograph is most probably taken in front of a large window of the Dalai Lama's new family house in Lhasa, Yabshi Takster. The bottom of a bird cage may be seen in the top left hand corner.