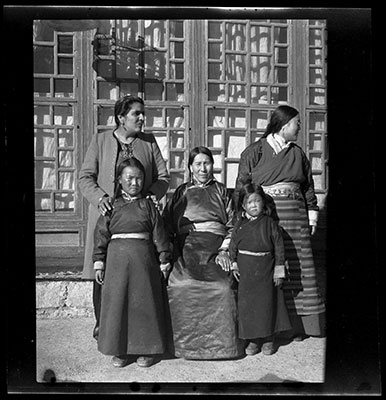 The Dalai Lama's mother, Gyayum Chenmo, Dekyi Tsering, (seated) with the wife of an Indian official, standing on the left and her eldest daughter, Tsering Dolma (in sunglasses) on the right. The girl on the left is the Dalai Lama's sister, Jetsun Pema (b. 1940) and the girl on the right is Tsering Dolma's daughter, Khando Tsering. The photograph is most probably taken in front of a large window of the Dalai Lama's new family house in Lhasa, Yabshi Takster. The bottom of a bird cage may be seen in the top left hand corner.

Clare Harris 2003: The 14th Dalai Lama’s mother – know to Tibetans as Gyayum chenmo (or “great mother”) with two of his siblings, an unidentified Indian woman and a Tibetan maid. Gyayum Chenmo gave birth to the 14th Dalai Lama in a village near Kumbum in Amdo, eastern Tibet on June 6th 1935. Since they lived in Amdo, the family spoke Chinese but as Gould remarks “The children are sturdy and intelligent and, as might be expected, have easily out-distanced their parents in learning Tibetan. No family could appear to be more closely knit. The happiness in their faces must stand for real happiness in their lives”. (1957:220)