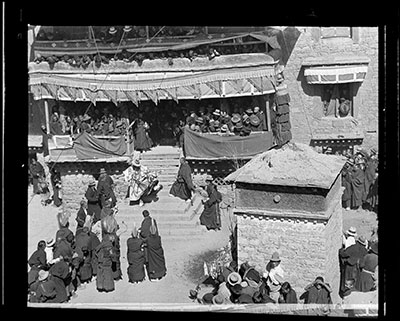 The Darpoling (dar po gling) Oracle in ceremonial dress dancing down the steps of the temple of Darpoling. There is a group of monks at the bottom of the steps beating hand-held drums and a monk at the top of the steps holding a ritual offering. Crowds of spectators throng the balconies and verandah of the temple. In the courtyard on the right there is a square shaped building, possibly housing a prayer-wheel, with a banner on the roof.