Crowds gathered to watch the burning of Torgya 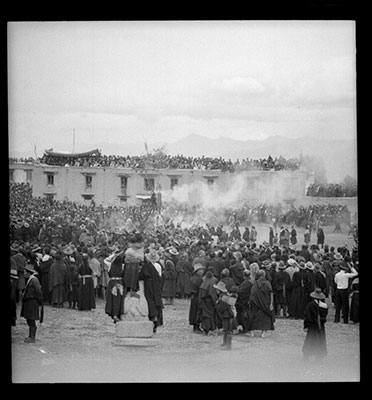 Crowds surrounding a burning bonfire on which a Torma is being destroyed during the special Torgyag chenpo held in Lhasa. There are also crowds of spectators on the rooftops of surrounding buildings. In the foreground there are three people perched on a stone structure.

Manual Catalogues - Richardson's Handlist - 'Vol. 5' 'Nos 48-54. Gtor rgyag chen-po. A special gtor rgyag on 25th July 1948 directed against the threat from Chinese Communists. Prayer ceremony near old Chinese Yamen on east south of city. Large body of monks chanting and clapping hands slowly; a special gtor ma lit by the Gnas chung Oracle, contained many strange things including a human skin. At the end of the ceremony a great storm of wind, dust and thunder suddenly blew up from a clear sky.' [KC 14/8/2006]

Other Information - Dates: According to the Handlist that Richardson compiled of his images some years after he left Lhasa, and according to the notes on his negative index, this and related images were taken in 1948. However, The two images in this related group of contact prints are dated both to 1949 and 1949/50, even though are clearly taken on the same occasion/day some minutes apart. Other images of this event apparently identified as having been taken in 1950 are printed out on Ridax paper, suggesting that these may have been taken in a different year - but the precise dating remains inconclusive and demonstrates some of the difficulties of memory that even someone as meticulous in his attention to detail as Hugh Richardson could be [MS 19/12/2005]