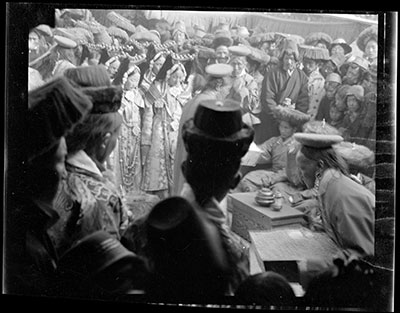 Female attendants at the 'Preparing the camp at Lubu' (klu sbug sgar sgrig) ceremony on a grassy meadow south of the Lingkor. There is a large number of onlookers. This ceremony took place on the 22nd day of the First Tibetan month. The women are wearing fine brocade robes, striped mantles around their shoulders and triangular, central Tibetan headdresses decorated with corals. They see to be bowing in greeting or farewell. Small tables have been placed in front of seated male officials with tea cups on top of them.