Crowds in the Sho area below Potala at Sertreng 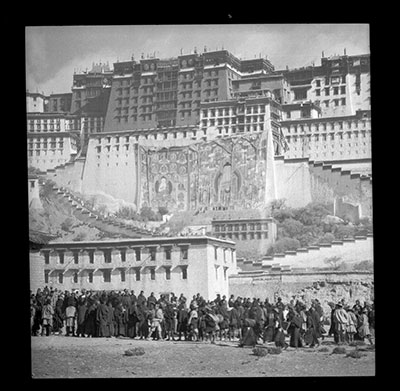 Part of the southern face of the Potala adorned with two appliquéd banners, Koku, (gos sku) for the Sertreng ceremony (tshogs mchod ser spreng) on the 30th day of the 2nd Tibetan month. The banners have images of the Buddha surrounded by deities and bodhisattvas. Some monks are processing at the bottom of the image.

Manual Catalogues - Richardson's Handlist - 'Vol. 5' 'Nos. 34-7. The Tshogs-mchod Gser-'phreng. In the second month there is a lesser prayer assembly from the 19th to the 29th. On the 29th there is a Scapegoat Ceremony (in another album) and on the 30th a day-long procession takes place round the Potala. In the morning monks from several monasteries, smartly dressed and well washed go to the Jo-khang where they receive a great variety of precious and sacred objects to carryin the procession. A large number of tall banners are carried in front; the objects include shrines, images, musical instruments and so on. The procession enters the courtyard at the foot of the Potala where various ceremonies take place. As the procession starts two huge applique banners (gos-sku) are hung on the face of the Potala. They are drawn up from the ground by a team of monks on a ramp of the Potala. The ceremonies include several different dances, the appearance of the Gnas-chung Oracle, etc. There are other photographs of the Ser 'phreng in Album A.' [KC 12/8/2006]