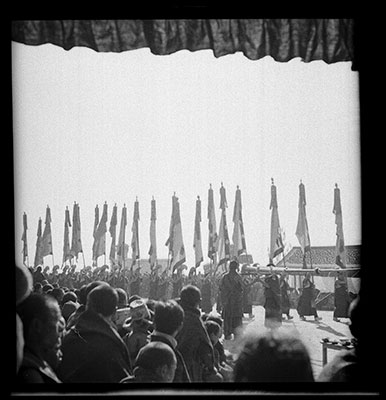 Procession of monks with banners during the 'Golden Proession' below the Potala at the time of the Sertreng ceremony (tshogs mchod ser spreng) on the 30th day of the 2nd Tibetan month. On the right two monks may be seen supporting two long horn instruments (dung chen). Crowds of onlookers may be seen in the foreground.

Other Information - Background: Richardson describes the Sertreng ceremony in Ceremonies of the Lhasa Year, 1993, London, Serindia Publications, pp. 74-81. " ... a spectacular ceremony, the Sertreng, in which hundreds of participants marched round the Potala with banners, religious objects and music." [KC 12/8/2006]