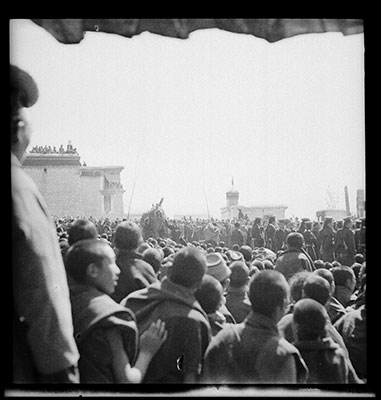 The Dalai Lama's elephant taking part in the 'Golden Procession' around the Potala at the time of the Sertreng ceremony (tshogs mchod ser spreng) on the 30th day of the 2nd Tibetan month. A line of officials wearing flat-topped hats may be seen on the right and crowds of monk and lay onlookers are in the foreground.

Other Information - Background: Richardson describes the Sertreng ceremony in Ceremonies of the Lhasa Year, 1993, London, Serindia Publications, pp. 74-81. " ... a spectacular ceremony, the Sertreng, in which hundreds of participants marched round the Potala with banners, religious objects and music. ... Towards early afrernoon the procession gradually moves out of the Sho and on to the road around the Potala. ... The Dalai Lama's live elephant arrives with beautiful silk and brocade trappings. It kneels and salutes the prescence of the Dalai Lama and marches off ... ." [KC 14/8/2006]