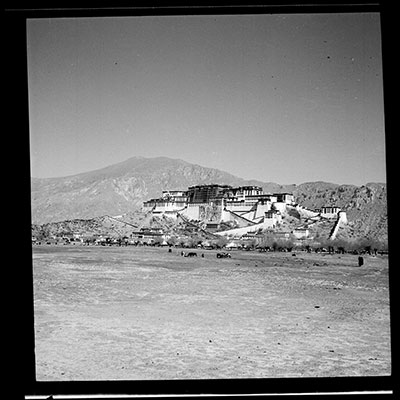 The Potala palace taken from the south. There are two appliquéd banners, Koku, (gos sku) displayed on the wall on the face of the building. The Koku was displayed on the 30th day of the 2nd Tibetan month for the Sertreng ceremony (tshogs mchod ser spreng). The Shol area of Lhasa can be seen at the foot of the building and there are animals grazing in the foreground.

Other Information - Background: Richardson describes the Sertreng ceremony in Ceremonies of the Lhasa Year, 1993, London, Serindia Publications, pp. 74-81. " ... a spectacular ceremony, the Sertreng, in which hundreds of participants marched round the Potala with banners, religious objects and music. ... the Koku - "The Silk Image" - a great applique banner which covers the lower face of he Potala for a space of some 75 by 40 feet. It consists of two panels, one rather larger than the other; in the centre of which is a huge figure of the Buddha surorunded by many deities and bodhisattvas. The priviledge of hauling it up is enjoyed by the monks of the Pempora college of Drepung. ..." [KC 12/8/2006]

Other Information - Dates: Contact prints of the kind that was made of this image which had red development numbers of '6--' seem to have been developed in c.1938. However, Richardson does not seem to have been in Lhasa to witness this ceremony in 1938 and so it seems most likely that the image was taken in 1939 [MS 19/12/2005]