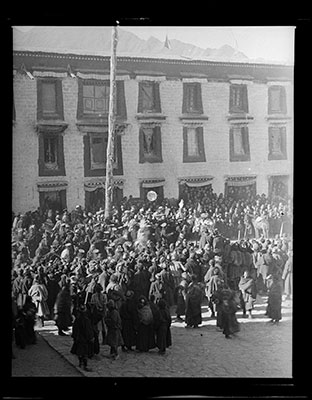 Other Information - Background: See Hugh Richardson, Ceremonies of the Lhasa Yea r, 1993, London: Serindia Publications, pp. 27-30 for a description of this event. "This ceremony, the Jampa Dendren, is a very different mood from those of the preceding days. The air having been cleared of evil influences by the Monlam Torgya, the time is propitious for an invitation to the Future Buddha, the kindly Jampa (Maitreya), to speed his coming. [KC 9/8/2006]