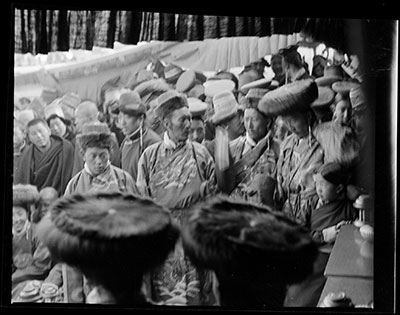 Officials and attendants at the 'Preparing the camp at Lubu' (klu sbug sgar sgrig) ceremony in a small enclosure on a grassy meadow south of the Lingkor. This ceremony took place on the 22nd day of the First Tibetan month. They are wearing ceremonial robes and some of them are wearing otter skin wogor (wa sgor) hats and they are surrounded by their retinue and onlookers. Two tables joined together can be seen on the right of the image with tea cups standing on them.