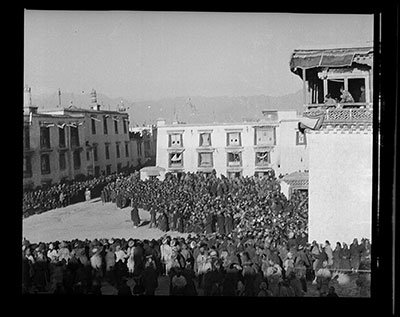 Crowds of monks and laypeople watching the proceedings of the Jampa Dendren (byams pa gdan dren) festival on the 25th day of the 1st Tibetan month in the Sungchora part of the Barkhor. A runner can be seen running into the open space in the centre. Some of the monks are holding poles with which to control the crowds. The building on the left is probably the Kyitodpa with the Ragashar house next to it. The building in the right is the Doring House and the building on the right is a corner of the Jokhang with balconies on the top floor from where officials watched the proceedings. The photograph is taken from the Ngagkhang.