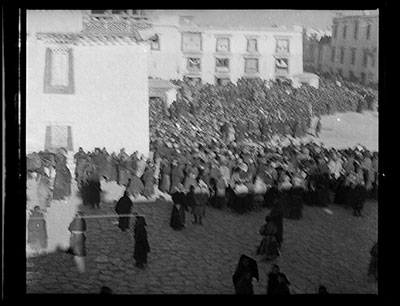 Crowds of monks and officials in balconies watching the proceedings of the Jampa Dendren (byams pa gdan dren) festival on the 25th day of the 1st Tibetan month in the Sungchora part of the Barkhor. The building on the left is a corner of the Jokhang with balconies on the top floor. Some of the windows are covered with cloth covers. The photograph is taken from the Yabshi Sampho house.