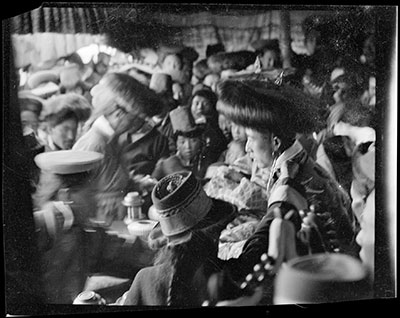 One of the Yaso commanders at the 'Preparing the camp at Lubu' (klu sbug sgar sgrig) ceremony in a small enclosure on a grassy meadow south of the Lingkor. This ceremony took place on the 22nd day of the First Tibetan month. They are wearing ceremonial robes and hats and they are surrounded by their retinue including women who assist in serving the Yaso. Their triangular headdresses may be seen in the foreground of the image.