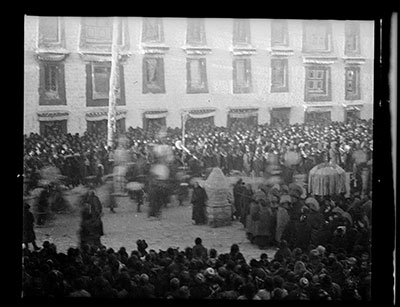 Crowds of monks and laypeople gathered for the Jampa Dendren (byams pa gdan dren) festival on the 25th day of the 1st Tibetan month in the Sungchora part of the Barkhor. The image is blurred in the centre suggesting that the subjects are moving. Also in the centre is a incense burner (bsang khang) and further to the right, a ceremonial umbrella. The house in the background may be the Yabshi Sampho and the prayer flag pole, the Kesang Darchen. The photograph is taken from the Ngagkhang.