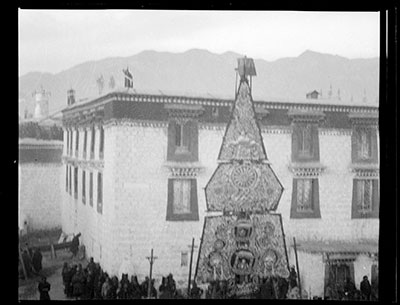 Chopa (mchod pa), Torma-shaped ornate butter offering, erected on the Barkhor during Chonga Chopa (bco lnga mchod pa) on the 15th of 1st Tibetan month. The building immediately behind the chopa is the south west corner of the Jokhang. The designs on the chodpa have religious motifs. The scale of the chopa is seen in relation to the people surrounding it.