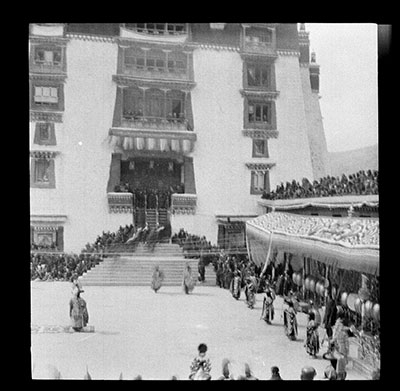 The Eastern Courtyard (deyang shar) of the Potala is the setting for the important ceremony of the 'Votive Offering of the Twenty-Ninth Day', Tse gutor (rtse dgu gtor) held on the 29th day of the 12th Tibetan month. The long, steep, triple stair through which the dancers enter the courtyard can be seen in the centre of the image and above it three wide windows. The topmost one is reserved for the Dalai Lama and the lower two for the Kashag and other high-ranking officials. The figure of a black-hatted dancer can be seen on the left and a line of masked dancers are standing on the right in front of the drums and horns of the monk musicians under an appliqué canopy.

Manual Catalogues - Richardson's Handlist - 'Vol. 5' Nos. 8-11 "The Lama dance at the end of the old year, on the 29th of the 12th month, in the courtyard of the at the east end of the Potala, known as Bde-yangs-shar. The Dalai Lama watches from his rooms, high up overlooking the courtyard. no.11 shows the monks' orchestra. (The Tibet Society of the U.K. has films of this ceremony which is called the Rtse Dgu-gtor, "the Gtor-rgyag at the Rtse on the 29th.)"

Other Information - Background: See Hugh Richardson, Ceremonies of the Lhasa Year , 1993, London: Serindia Publications, pp. 116-123 for a description of this event. "The year draws to a close with the Tse Gutor, a solemn performance of cham , Tantric dances, to purge the accumulated sins and mischances of the past and to clear the way for the year to come. Of the whole cycle of ceremonies, it is the most deeply charged with mystic, almost sacramental, significance. ... The setting for the ceremony is the great eastern courtyard of the Potala, the Deyang Shar. It is entered by a long, steep, triple stair below which is a well-proportioned flight of stone steps. The wide central windows are hung with bright valances; the uppermost, curtained with yellow silk, is that of the private room of the Dalai Lama from which he may watch the dances; the two below are for the Kashag and other senior officials repectively. Over the head of the stairway is a fine brocade curtain. On the north side of the courtyard a long canopy, beautifully decorated with designs in blue and with a large demon head in the centre, shelters the padded seats for the monk orchestra. An open parapet above it provides a viewpoint for spectators as does a similar parapet to the south beneath which are galleries for ladies and other distinguished persons. ... " (p. 116) [KC 1/8/2006]