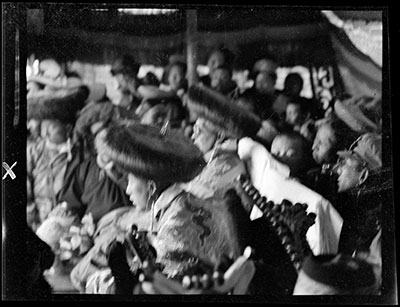 Yaso commanders at the 'Preparing the camp at Lubu' (klu sbug sgar sgrig) ceremony in a small enclosure on a grassy meadow south of the Lingkor. This ceremony took place on the 22nd day of the First Tibetan month. They are wearing ceremonial robes and hats and they are surrounded by their retinue including women who assist in serving the Yaso. Their triangular headdresses may be seen in the foreground of the image.

Other Information - Background: See Hugh Richardson, Ceremonies of the Lhasa Year , 1993, London: Serindia Publications, pp 31-33 for a description of this event. "Early on the twenty-second a beautifully decorated tent in a small enclosure is set up on a grassy meadow across a small branch of the Kyichu south of the Lingkor, where it passes the boudary of the Shuktrilingka south-east of the Potala. This is to be the headquarters of two noble officials who have been appointed with the Mongol title of Yaso as commanders of two wings of the ancient militia to leadthe military exercises of the next two days. ... they ride in state round the Barkor to Lubu where a crowd of their relations, friends and onlookers is waiting. The ceremony of the Lubu Gardrik ("Preparing the Camp at Lubu") follows. The Yaso take their seat on thrones with low, carved and painted wooden tables in front and their attendants line up on either side. The Yaso robes are of the most costly brocade embroidered with dragons on the front and back, and so heavey they can stand up by themselves. They wear large, round, flat hats with a fur brim and red silk crown with a vase-shaped gold and turquoise ornament and a coral button on top. The robe is girded by a wide gold belt and they wear a dagger, an embroidered purse and a silk coverred cup case. ..." (p.31) [KC 31/7/2006]