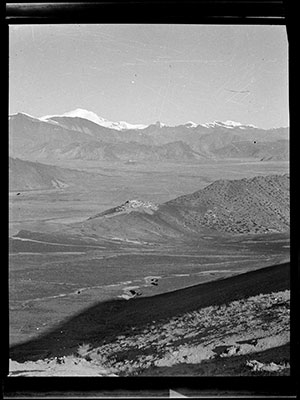 Valley towards Yamdrok Tso Lake with snow-capped mountain range in distance. Chokhorgang (chos 'khor sgang) monastery and dzong may be seen in the centre of the image.

Manual Catalogues - Notes in negative album '4' - Folio 99. 'down towards Yamdrok'.

Other Information - Richardson mentions this site in High Peaks, Pure Earth , London, Serindia Publications, 1998, p. 324, "... on a rocky spur near the south end of the Yar-'brog-mtsho is the 'Brug-pa Bka'-brgyud-pa monastery of Chos-'khor-sgang (1950), an offshoot of the Ra-lung monastery. It seemed gloomy and neglected ... ".