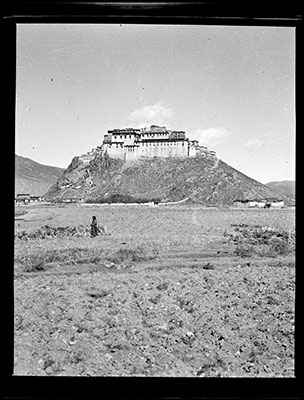 Talung (rta lung) Dzong near Yamdrok Tso Lake on top of a hillock surrounded by fields. The temple of Tharpaling may be seen on the left hand side at the base of the hillock. There is a woman in the field in the foreground.

Manual Catalogues - [Hugh Richardson in conversation with Paddy Booz; see PRM Related Documents File] 'Talung, Talung Dzong, Rta lung (not to be confused with Talung! - Stag lung -). This Talung appears as a block on a hill south of Nagartse, near Yamdrok Tso lake.'

Other Information - Background: The monastery and dzong (fort) is known as lho stag lung (Taklung south) and not to be confused with Taklung monastery near Lhasa. Taklung is a branch monastery of Nying ma monastery of Dorje Drak (rdo rje brag) in Gongkar Dzong (gong dkar rdzong). [TS 20/6/2005]