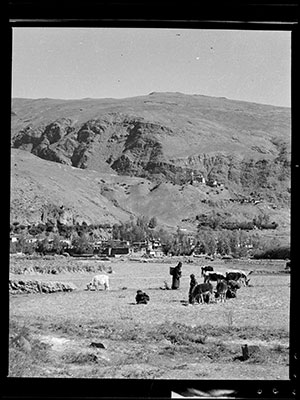 The monastery of Lhalung at the base of a mountain in Lhodrag near the border with Bhutan. There are also buildings further up the mountain. Cattle are grazing in the fields in the foreground with several people, one of whom has a basket on her back, among them.

Other Information - Setting: Lha lung (lha lung) monastery is located near Dowa Dzong in Lho drak on the north bank of the Kuru chu. (TS)

Other Information - Setting: Hugh Richardson describes this site in High peaks, Pure Earth , 1998, London: Serindia Publications, pp. 323-4, "Some twelve miles to the north [of Padma-gling], across the sinister pass of the Sbrum-la, which climbs over a flank of Sku-lha Gangsri in the upper waters of the Lho-brag-chu, is the ancient monastery of Lha-lung (1950). Its situation resembles that of a prosperous country mansion but its religious character is at once apparent in the massive enclosing wall topped by a row of mchod-rten, several of which, including that through which the entrance lies, being of considerable size. ..." [KC 7/3/2006]