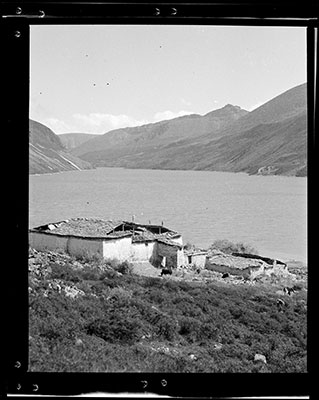 Pemaling monastery (pad ma gling dgon) on the bank of lake Pemaling Tso surrounded by mountains in the Lhodrag area near the Bhutan border.

Manual Catalogues - [Hugh Richardson in conversation with Paddy Booz; see PRM Related Documents File] 'Pemaling, Peme Ling, Padma-gling (sgnub (sgnib) mtsho Padma gling). This is a Nyingmapa temple of the 15th c. located close to (within?) the Kula Kangri range, near Bhutan; also near Lhakhang Dzong. The temple was so small, Hugh Richardson had to sleep sideways in front of the altar. In the Kula Kangri mountains is the holy Pemaling lake; this tiny monastery/temple is on the lake's north shore.'

Other Information - Pamaling Monastery was founded by Pema Lingpa (1450-1521).