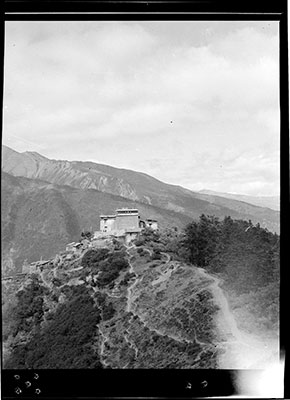 Kharchu (mkhar chu) monastery on a hilltop in Lhobrag near the Bhutan border surrounded by the spurs of a mountain range. A track is clearly visible on the right-hand side. There is a light spot on the right hand side.

Other Information - Location: Hugh Richardson mentions the site in High Peaks, Pure Earth , 1998, London: Serindia, p. 293, "On asmall hill nearby [to Mkho-mthing Lha-khang in Lho-brag on the border with Bhutan] is the temple of Mkhar-chu attributed to Padmasambhava." Also, he provides a brief description of it, "... Mkhar-chu (1950) monastery, ... , prominent on a hillside overlooking the gorge of the Lho-brag river, was a favourite place of pilgrimage. It was built by Padmasambhava and contained a large image of him ..." ( ibid. p.322)

Other Information - Background: Kharchu (mkhar chu) monastery is situated on a hilltop overlooking the gorge of the Lhodrak (Lho-brag) river. It is one of the most important pilgrimage sites for the Nyingma and Kagyu schools of Tibetan Buddhism. Near the monastery is Chakpurchen cave, Padmasambhava's mediatation cave, which is regarded as one of the most important scared sites associated with Padmasambhava. [TS 9/6/2005]