Image of Vairocana at Khoting temple 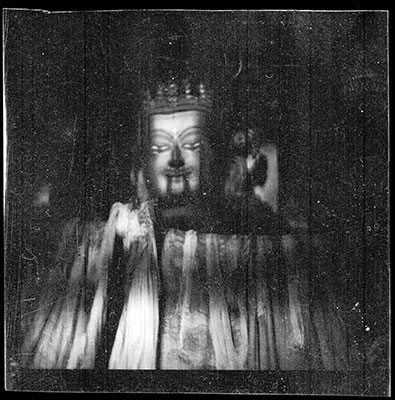 The image of Vairocana (rnam par snag mdzad) in Khoting temple at Lhakhang Dzong in the Lhodrag district near the border with Bhutan.

Other information - Background: Lhakhang Dzong is situated on the confluence of the Kuru chu and Tamzhol rivers. The Dzong was an important trading post between Eastern Bhutan and Tsetang, in Central Tibet. In the middle of the settlement is the Khoting Lhakhang (mkho mthing lha khang) founded by Songtsen Gampo during the 7th century. [TS 6/6/2005] Richardson wrote of Khoting temple, "Here [at Lha-khang Dzong] is the ancient but little known temple of Mkho-thing (1950) founded by Srong-brtsan Sgam-po as one of his twelve (some say 108) temples to bind down the limbs of a female demon manacing his kingdom and to give spritual protection to his borders. Half hidden by a buckthorn hedge, it is a little, self-effacing, white-walled building with a roof of wooden shingles and a small, a flat, slate-covered rgya-phibs topped by an insignificant gilded finial." High Peaks, Pure Earth, 1998, London, Serindia Publications, p. 321. "In the centre of a dimly lit spacious hall is a huge fourfold Rnam-par snang-mdzad (Vairocana) on a high pedestal looking down impassively through half-hooded eyes, its hand in the gesture of fearlessness." ibid. p.322.