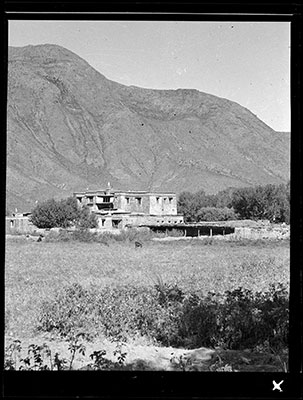 Lhakhang Dzong on a small plateau with trees and fields around it in the area of Lhodrag not far from the border with Bhutan. There are cattle grazing in the foreground and a mountain range in the background.

Other information - Setting: Lhakhang is situated on the confluence of the Kuru chu and Tamzhol rivers. The Dzong was an important trading post between Eastern Bhutan and Tsetang, in Central Tibet. In the middle of the settlement is the Khoting Lhakhang (mkho mthing lha khang) founded by Songtsen Gampo during the 7th century. [TS 6/6/2005]