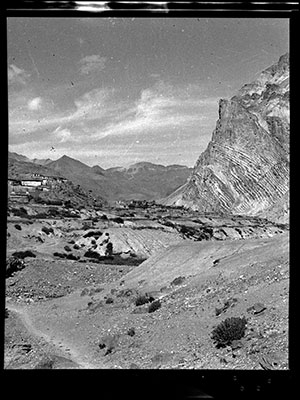 A rock formation known as Drak Sinmo near Nezhi scored with lines representing the claw marks of the ogress believed to be the progenitor of the Tibetan people. There is the settlement fo Nezhi across from this rock on the left and some buildings below it. There is a track in the foreground.

Other Information - Location: The cliff is known as Drak Sinmo Barje (Brag srin mo sbar rjes) and also known as Sangri (Mt Snow lion). The marks on the cliff face are believed to be the claw marks of the orgress, who is regarded as the primogenitor of the Tibetan people. [TS 19/5/2005]