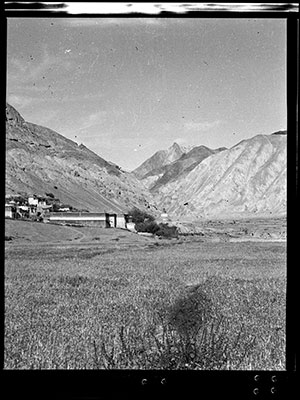 Nezhi (gnas bzhi) monastery founded in the 13th century by Terton Guru Chowang (1212-70) and housing his golden reliquary. A reliquary monument may be seen in the centre of the image. There are fields in the foreground and mountains in the background.

Other Information - Location: " Gnas-gzhi (1950), an important Rnying ma-pa monastery, is situated a little way down the valley on the west side. It was founded in the thirteenth century by Guru Chos-dbang, who was born here and whose image has a place on the main altar. His dmar-gdung - a gilded mchod-rten [reliquary monument] containing his mummified body- is in a separate chapel together with those of his descendents". Hugh Richardson, High Peaks, Pure Earth. Collected Writings on Tibetan History and Culture , 1998, Serindia: London. p.321. Also, mention is made of the chorten visible in the centre of this image, "In the valley below the monastery [of Smra-bo lcogs-pa] ... near the point where the Chaparchu joins the larger Lho-brag Btsan-'gro-chu, there is another, white, [chorten] (visible in the photograph of Gnas-gzhi). ( ibid. )