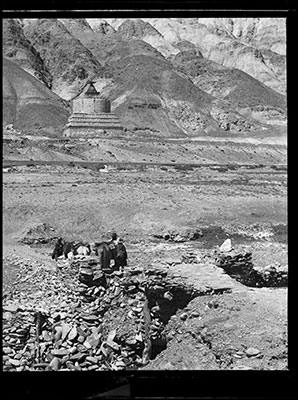 Reliquary monument (mchod rten) at base of mountain below Mawachok (smra bo lcogs). Two men with horses have just crossed a stone bridge in the foreground.

Other Information - Background: Richardson describes the site in High Peaks, Pure Earth , London, Serindia Publications, 1998, p. 321, " On the hillside above Ris-med Lha-khang is Smra-bo lcogs-pa (1950). Originaly founded in the time of the kngs, it became the home of the famous gter-ston, "discoverer of hidden religious texts", Myang-ral Nyi-ma 'od-zer. In front of the temple are two large mchod-rten which are much visited by pilgrims." Also, "In the valley below the monastery is a large mchod rten made by Mnga'-bdag Myang. ..."

Other Information - Background: Mawo Chok (Smra bo lcogs) monastery is on the important monastery of Nying ma school of Tibetan Buddhism. The monastery is associated with Nyima Wosel, (1124-92), who was born near the monastery. Nyima Wosel is regarded one of five great discover kings (ter ton rgyal po rnga.) The monastery was founded in 12th Century at a sight where Nyima Wosel mediated. [TS 19/5/2005]