Fortress of Gongkhar Dzong with river flowing in front 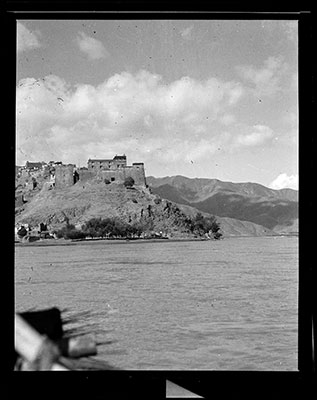 The fortress of Gongkhar dzong (gong dkar rdzong) near the confluence of the Tsangpo and Kyichu rivers. The photograph is taken from a vessel, most probably, a ferry boat on one of the rivers.

Other Information - Gong Khar is located on the banks of Tsangpo (Brahmaputra) and the fort used to be powerful centre for Sakya rulers until the 19th Century. (TS)

Other Information - Dates: The date of 1950 for this image is derived from Richardson’s negative album No.4, the cover of which is marked with ‘Lhobrag 1950’. There are 16 images, of Chidesho, Gongkhar Dzong, Lhasa Post Office, Nesar, Yamdrok Tso and Shabsha, Karmaling Chu, Lhobrag, which share the same batch development number and seem to relate to a trip that Richardson took in this year. His preference for using 6x4.5 images, the smallest exposure size possible using his Zeiss Super Ikonta camera, seems to have returned only towards the end of his time in Tibet, possibly to maximise the number of images that he could take on each roll of film (16 using a film plane mask of this size or 8 at 6x9 cm) and this also suggests that the image was taken at the end rather than the beginning of his residence in Tibet [MS 17/12/2005]