Drepung monastery from a distance. 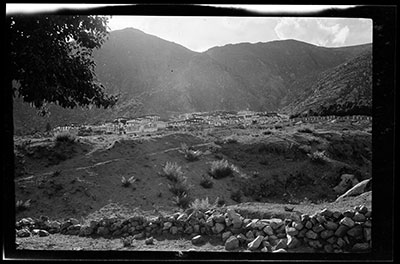 Other Information - Drepung is one of the three great monasteries of Tibet known as “Three Great Seats” (gdan sa gsum). Drepung ('Bras spungs) literately means Rice Heap because from distance the while houses looks like a heap of rice. The monastery is situated 8 km NW of Lhasa below the Gephel Utse ridge. The monastery was founded in 1416 by Jamyang Choje Tashi Palden (1397-1449) and named after the abode of Shridhanyakata in south India. It was the largest monastery in the world, inhabited by approximately 9000 monks of the Geluk school ( Dge-glugs-pa), and was closely associated with the Dalai Lama lineage.

Other Information - Dates: Richardson visited the monastery in 1936 (with the members of the British Mission under Sir Basil Gould) 1944 and in 1946 (to see an Ache Lhamo performance). Therefore, the photographs of Drepung could have been taken during these years. However, the size of the negative used, the type of print out paper on which the contact prints were made, and the subject matter and style of the images all suggest that these were probably taken in 1936, on one of the Zeiss Super Ikonta cameras that were part of the equipment used on the Mission under Sir Basil Gould [MS 19/12/2005]