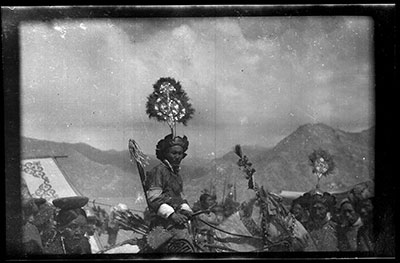 A member of the cavalry dressed in ancient armour, a plumed helmet of peacock feathers at the time of Trapshi Tsisher. His horse is also decorated with a plume. There is a tent on the

Research publication - "Annual parade of horsemen in traditional armour. Each aristocratic family in Lhasa used to provide one officer with six or seven retainers from their estates from ceremonial "call up" at the time of the New Year festival". David Snellgrove and Hugh Richardson, A Cultural History of Tibet , London, George Weidenfeld and Nicolson, Ltd., 1968. p. 122 and also see page 197. [TS 18/4/2005]