The Sho pillar and Chakpori 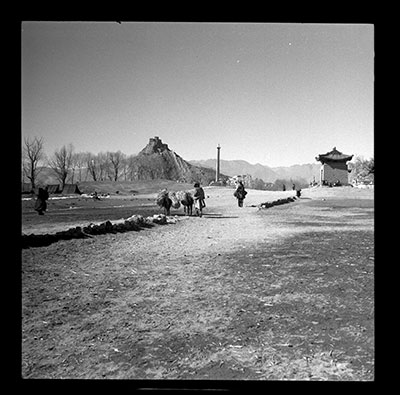 Sho inscription pillar in the centre. It was set up by a powerful minister to record his services to the king. It has a stone canopy topped by a carved finial representing the flaming wish-granting jewel. The Chakpori medicinal college is on top of the hill on the left and a small building with a sloping Chinese roof on the right. Further on the left, there are some tents and people are travelling on the well-marked road, some with pack animals.

Other Information - Dates: The date range of 1946-50 has been given for this this image as other contact prints of the type made from this image are datable to this period. Furthermore, it was during this time that Richardson seems to have developed his interest in Tibetan inscriptions most fully and made conscious efforts to make a photographic record of the main inscriptions before his departure in 1950. [MS 17/12/2005