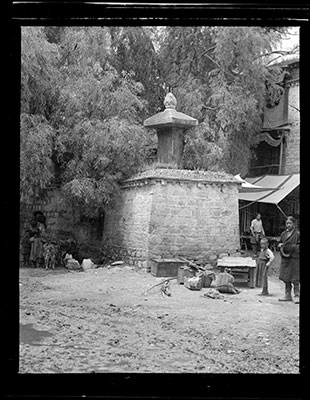 The Treaty pillar outside the Jokhang in Lhasa with the text of the Sino-Tibetan treaty of 821-2 . It is enclosed by a wall and there is a large overhanging willow tree in the background. In front there are some packing cases and a bag with a man and a girl beside it. On the right there is an awning with a shop stall and the shopkeeper standing in front of it. On the left there is a woman with a child and a sheep being used as a pack animal.

Research publication - David Snellgrove and Huge Richardson, A Cultural History of Tibet, London: George Weidenfeld and Nicolson, Ltd. 1968. p.38, "The stone pillar in Lhasa which bears a bilingual inscription recording the treaty made in 821/822 between China and Tibet". [TS 22/3/2005][TS 31/3/2005]

Other Information - History: For a full translation of and commentary on the inscription see H. E. Richardson, A Corpus of Early Tibetan Inscriptions , London, 1985. Royal Asiatic Society, pp:106-143. Richardson remarks that "The bilingual inscription on a stone pillar outside the Jo-khang at Lhasa recording a treaty between Tibet and China is probably the most widely known and in many ways the most important of the early inscriptions from Tibet. ... " (p. 106)